Take a look at the stats for Stomach Cancer, also known as Gastric Cancer, and you’ll realise it’s not an easy one to diagnose. Out of an estimated 28,000 cases in the US each year, nearly a third, 10,960, are expected to die. The figures in the UK are even worse with only 15% of patients expected to live beyond 10 years. The real clue lies in the fact that nearly a third of British patients first present with the illness in their emergency or A&E department, and given that the typical initial symptoms such as indigestion, wind or heartburn aren’t exactly emergency symptoms, this implies that most patients are experiencing a substantial and often fatal delay in getting a diagnosis. As stomach cancer symptoms are often easily mistaken for less serious conditions, it’s understandable that both patient and doctor won’t suspect a potentially fatal cancer as the cause. Which is why we’ve devoted this week’s blog to discussing the symptoms and when to seek advice, in the hopes we can help sufferers present much earlier to their doctor and consequently find a cure.

What is stomach cancer?

Stomach cancer is the 5th most common cancer worldwide and, due to its frequently late diagnosis, the 3rd most deadly. It occurs when abnormal cells in the stomach’s lining start growing uncontrollably, leading to the formation of a tumor. The stomach wall is made up of 5 layers of tissue and it’s in the innermost layer, the mucosa, that the cancer will start growing, spreading outwards as time passes. Left untreated, the cancer starts to spread to other parts of the body, usually via the lymphatic system.

Who’s at risk of stomach cancer?

In the vast majority of cases, stomach cancer is linked to lifestyle factors, which may explain why it rarely affects the young. 95% of cases occur in the over 55’s and men are twice as likely to develop the condition but these lifestyle choices also play a huge part: 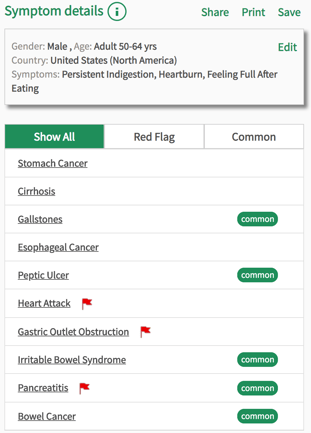 As we mentioned earlier, it is critical to recognise the early symptoms and stop the cancer in its tracks as soon as possible. The trouble is, early symptoms are often confused with less serious conditions such as stomach ulcers. if you’re suffering from any of the symptoms below, enter them into the Isabel Symptom Checker and research their causes as much as possible before discussing them with your doctor:

Rest assured that these are all common symptoms for many conditions and not usually caused by cancer, but if you’ve been suffering from them most days and for more than 3 weeks, it’s time to talk to your doctor.

More advanced symptoms of the disease can include:

Stomach cancer can also be mistakenly diagnosed as irritable bowel syndrome (IBS), celiac disease or inflammatory bowl disease (IBD), so if you’re being treated for these illnesses and your condition isn’t improving, suggest a possible investigation of stomach cancer to your doctor.

How is stomach cancer diagnosed?

If your doctor suspects stomach cancer, they will refer you to a specialist who is likely to arrange an endoscopy, which is a long, light tube with a camera on the end. It is inserted down your throat into your stomach to look for stomach ulcers and cancer. If cancer is detected, a biopsy, a small tissue sample, will be taken during the same procedure.  If cancer is finally diagnosed, you may need further tests to ascertain how far the disease has spread and could be referred for a scan, which will reveal if any tumors have developed elsewhere. These procedures will all help to determine what sort of treatment you need. If you are diagnosed with cancer this can be a very complex process with a lot of overwhelming information. We’ve written a blogpost on both cancer treatments and cancer types and stages, these might help you understand when these conversations are had.

How is stomach cancer treated?

Treatments will entirely depend on your overall health and how far the cancer has spread. Treatment options are surgery, chemotherapy and chemoradiation and are determined by what stage your cancer is at when diagnosed, you may receive surgery alone or a combination of these treatments.  Often if your tumor is stage 1B upwards at diagnosis then chemotherapy or chemoradiation may be given before surgery in order to shrink the cancer and make it easier to remove.

As this blog has hopefully made clear, it’s essential that we don’t ignore the early warning signs our body is giving us of stomach cancer, or any condition of the stomach. If you’re experiencing any of these symptoms, it’s hopefully something much less serious, but taking a few minutes to research them on the Isabel Symptom Checker and discussing the results with your doctor is a great next step. Could I have pulmonary hypertension (PH)?