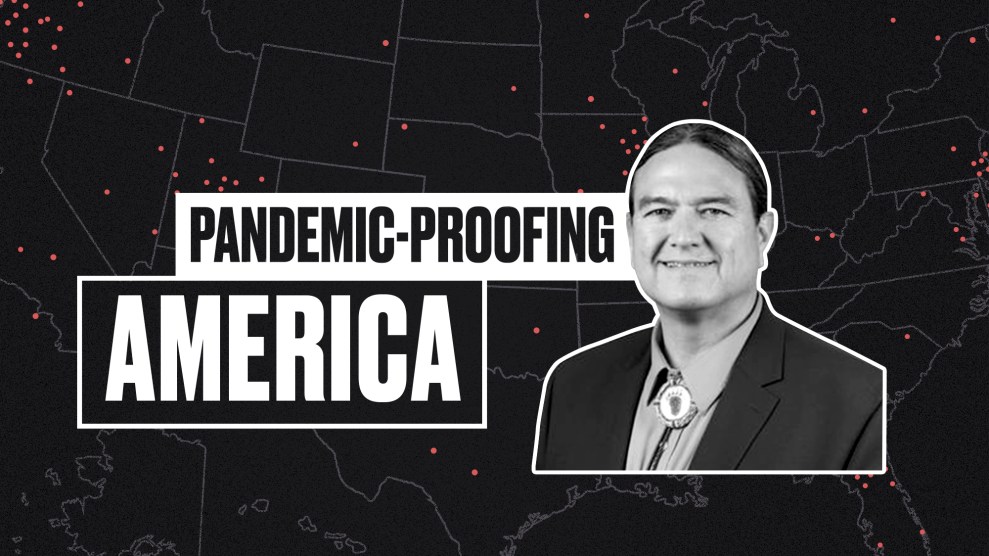 Mother Jones illustration; Courtesy of the University of North Dakota

For indispensable reporting on the coronavirus crisis and more, subscribe to Mother Jones’ newsletters.

As the world grapples with the devastation of the coronavirus, one thing is clear: The United States simply wasn’t prepared. Despite repeated warnings from infectious disease experts over the years, we lacked essential beds, equipment, and medication; public health advice was confusing; and our leadership offered no clear direction while sidelining credible health professionals and institutions. Infectious disease experts agree that it’s only a matter of time before the next pandemic hits, and that one could be even more deadly. So how do we fix what COVID-19 has shown was broken? In this Mother Jones series, we’re asking experts from a wide range of disciplines one question: What are the most important steps we can take to make sure we’re better prepared next time around?

A member of the Oglala Lakota tribe from the Pine Ridge Reservation in South Dakota, Dr. Donald Warne had an early interest in medical work—he comes from a long line of traditional healers. Today, Warne oversees the Master of Public Health degree program and a specialized PhD in Indigenous Health at the University of North Dakota. He’s also the director of Indians into Medicine, a program that creates much-needed pathways for Indigenous students to enter careers in health. Like other communities of color, Native Americans have been hit hard by COVID-19, with seven different tribes currently seeing case rates between 2,200 and 12,850 per 100,000—higher than the rates of any US state. Risk factors include tendencies toward intergenerational homes and high rates of preexisting conditions like diabetes and lung disease, but Dr. Warne also notes that Native communities have long grappled with lack of basic health infrastructure.

On developing the Indian Health Service: American Indians and Alaskan Natives are the only population in the US that’s actually born with a legal right to health services. That’s based on hundreds of treaties signed between tribal nations and the federal government, which included language like “promise of all proper care and protection” in exchange for land and natural resources. The treaties are contracts, and the federal government has never lived up to its treaty obligations—so they are in breach of contract. The Indian Health Service is not “free health care.” It’s the largest prepaid health plan in history, because of everything we gave up for basic social services like housing, education and health care. That’s why there’s a Bureau of Indian Affairs, that’s why there’s an Indian Health Service. That’s really the starting point.

In public health, we try to prevent disease and in medicine, we treat disease. Because of the longstanding, intergenerational underfunding, all the resources get used up for medical care, with very little left for health promotion and disease prevention programs in Indian Country. We don’t have healthy food programs. And then on the other end of the spectrum, when it comes to higher levels of care, when people are very sick from COVID-19, quite often they need Intensive Care Unit admission, they also need ventilators. But we typically don’t have those services on reservations either.

It’s going to require a generation of good policy to make up for generations of bad policy, but among the most important things is to fully fund IHS. We’re not asking for anything unusual, all we’re asking for is the federal government to live up to its treaty obligations. The United States is one of the first nations to point the finger at human rights abuses around the globe, but those countries can easily put the finger back at us for the way it’s treated its Indigenous people.

On preparing Indian Country for a future pandemic: Most of the [disease response] infrastructure needs to be built from the ground up. It doesn’t exist. One starting point would be with the Tribal Epidemiology Centers—there’s basically one for each of the 12 areas of the Indian Health Service. They’re funded mainly through IHS, but they have other sources of funding, including the CDC. Their various levels of capacities are dependent on resources, but we do have this network of centers that could assist tribes with building communications and information systems, and with smaller tribes, perhaps pool resources. They can work to do regional public health programming, and surveillance data collection and analysis, and even do community health needs assessments and determine where needs are within each individual community. That’s one piece of infrastructure that’s, again, terribly inadequately resourced, but at least the network exists.

One thing that COVID-19 has done is shine a bright light on these inadequacies. Some basic things that we take for granted if we live in a city or suburb, are just not available in tribal communities: connectivity and communication systems, cell phone access, high speed internet access—those basic services are not always available, particularly in the more impoverished communities. It’s impossible to quarantine people when you don’t have adequate housing.

On the need for culturally competent care: A public health program that is effective in the white population of Boston is not necessarily going to be effective for American Indians [on the] Pine Ridge [Indian Reservation]. That’s why much of the work I do now is on workforce development—teaching a curriculum that incorporates the culturally relevant values, beliefs and behaviors, as well as traditions and ceremonies, because those are not just important components of who we are as Indigenous people, but also important components of a public health system. We cannot just assume that one size fits all.

The CDC will tell us that we have to have tobacco-free workplaces and tobacco-free policies. But in the Northern Plains, we have a longstanding relationship with tobacco.

For example, the CDC will tell us that we have to have tobacco-free workplaces and tobacco-free policies. But in the Northern Plains, we have a longstanding relationship with tobacco—not cigarettes, but a blend of herbs that are medicinal and healing. When we have culturally inept approaches saying everything has to be tobacco-free, we’re actually alienating an entire segment of community and culturally based strength through prayer and ceremony. When you tell Indians they have to be tobacco-free, you’re telling us we have to be prayer-free. The CDC has taken our input and made significant improvements—again, that’s not an issue if you live in Atlanta or Boston, but it’s a huge issue if you live in the Northern Plains.

On why it’s important to build up the Native health workforce: If you look at all the data regarding health education and health professional programs, people tend to work with communities that they’re familiar with. It’s much more likely that someone from a reservation will go back to work there than to expect someone who’s not from the reservation to go work in that community. So we have to build our own. We have to have pathways programs, from grade school all the way through medical school, and that’s part of what we do at [the University of North Dakota]. We have a Summer Institute—it’s going on virtually right now, because of the pandemic—but usually we have 50 middle and high school kids from American Indian communities all over the country come to spend six weeks with us at UND. They have courses in biology, chemistry, physics, math, communications and health, and we do fun things and cultural things on nights and weekends. We nurture and develop a lot of our future health professionals in those pathways programs.

The challenge again—it’s funded mainly through IHS, and it’s so terribly underfunded that we can’t support all the kids who want to participate. To me, that’s just a travesty. This year we had well over 100 applications for 48 spots. And we shouldn’t be turning any kid away, but that’s the circumstances that we’re in. So even the workforce development is hindered by Congress not adequately funding Indian Health Service.

On the relationship between tribes and other public health authorities: In some areas of the IHS, the area office has a very good relationship with the tribes, and in other areas it’s a strange or even adversarial relationship, with the IHS programs and administrators not viewed as advocates. In some places it’s working incredibly well, in some places it’s dysfunctional. That does have a huge impact on quality of communication and access to resources.

If a tribe is exercising its sovereignty to have a health check, the government has no business to get in the way of that.

When you look at tribes and states, one of the most adversarial relationships is in South Dakota, where I’m from. [Governor] Kristi Noem is just the latest in a long line of political leaders who don’t respect tribal sovereignty, and she certainly doesn’t respect public health principles. [Gov. Noem has tried to stop the Pine Ridge and Cheyenne River Reservations from maintaining COVID-19 checkpoints on their borders.]

It’s not that the borders are closed—it’s a health check: If someone has a fever they do contact tracing; if someone is from a hotspot, they’re not allowed in. Cheyenne River, for example, they’ve now tested about 2000 people, there’s only six positives because of what they’re doing to control the population. It’s one of the lowest positive rates in the nation. Thank God, because they’re at incredibly high risk for for catastrophic outcomes. If they have an outbreak of COVID-19 on Cheyenne River, it would basically be a mirror image of what’s happening in Navajo [Nation]. It is absolutely a tribal sovereignty issue.

Of the six they diagnosed, one of them was diagnosed because of the checkpoint, and then they went to quarantine. Two of their family members were diagnosed. But without the checkpoint, that one case could have become 200.

When Governor Noem is saying that you just need to open up the borders, without any health checkpoints, that’s disregard for human life. People will die. People have died in tribal communities because of the quick spread of the disease. [We have] inadequate housing, poverty, and inadequate nutrition, and all of those risk factors like diabetes, heart disease, and lung disease. So if the tribe is exercising its sovereignty to have a health check, the government has no business to get in the way of that. I think it’s just criminal what she’s done. It’s good public health and she’s trying to get in the way of it.