Just when we were all hoping former Charmed actress, conservative basher and Trump-hater extraordinaire Alyssa Milano had tuckered herself out from her recent loud social media meltdown, she’s come back to chirp about her having Covid without knowing it. Now she’s blasting the U.S. Covid testing as being at fault. 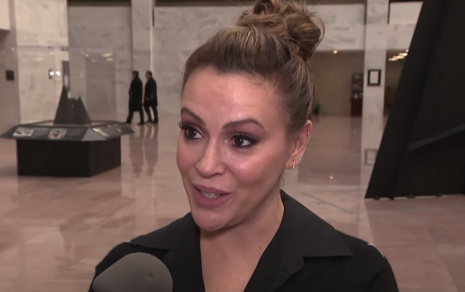 Honestly – and we’re speaking for the general public here – who cares?!

Milano, the 47 year-old actress now known more for her aggressive social media rants in support of all manner of vile leftist things like abortion and gun control, announced that she recently tested positive on a Covid antibody test, which means that she did in fact have the virus for a bit. The realization prompted more political outrage from the woman who claimed to have taken several Covid screenings over terrible flu-like symptoms which came back negative.

The four things Milano wants us to believe are that she had Covid, that the so far nearly 65 million Chinese virus tests done in the US are faulty because hers came back negative; Trump touts these faulty tests so he is obviously Hitler; and that we should totally feel terrible for her because of the hell she went through.

Yeah, we’re sorry, Alyssa. Though weren’t you the one bragging about your homemade crochet Chinese virus mask with the one hundred holes in it?

Milano revealed that she finally confirmed her worst fears about her the Covid-like symptoms she had suffered back in the spring. In a lengthy August 5 Instagram post, the actress posted a photo of herself in an oxygen mask and captioned it with a long message about her Covid antibody test coming back positive, proving that she had the disease all along even though previous Covid screenings told her she tested negative.

Milano wrote, “I went and got an antibody test from a blood draw (not the finger prick) from a lab. I am POSITIVE for covid antibodies. I had Covid19.” And of course, that would explain why she had Covid symptoms back in April.

She further described how she had been living for “the last 4 months with lingering symptoms like vertigo, stomach abnormalities, irregular periods, heart palpitations, shortness of breath, zero short term memory, and general malaise.” She apparently contracted the virus back in April, but she was led to believe it wasn’t Covid due to testing negative on three Covid tests back in March.

She claimed, “At the very end of march I took two covid19 tests and both were negative. I also took a covid antibody test (the finger prick test) after I was feeling a bit better. NEGATIVE.”

The point of the story, besides the obligatory “woe is me” sympathy grab, is that the very thing most people agree that the U.S. has done well with in combating the Kung Flu, the production of millions of tests, is not actually a selling point. Trump is always going on about how we are the best country in terms of testing capacity, often quipping that the massive number of our cases is a testament to that fact.

“I just want you to be aware that our testing system is flawed and we don’t know the real numbers,” Alyssa moaned towards the end of her long post. Though we don’t necessarily disagree with Milano that the “numbers” aren’t being distorted by the media. “I also want you to know, this illness is not a hoax. I thought I was dying,” she added. Well we are sorry, Alyssa. Take a break. Relax. For all of our sakes. Larry C. Johnson: There Is an Unprecedented Gun and Ammo Shortage in America Today