“Congress shall make no law . . . abridging . . . the right of the people peaceably to assemble, and to petition the government for a redress of grievances.” — First Amendment to the Constitution

On MSNBC’s AM Joy show today, Ayanna Pressley, a Democrat congresswoman from Massachusetts and member of The Squad, said:

“I’m looking to the public . . . There needs to be unrest in the streets for as long as there is unrest in our lives. And unfortunately, there’s plenty to go around.”

Was Pressley fomenting violence? She certainly was inciting “unrest”—with no end in sight.

Guest host Tiffany Cross, who has been auditioning to fill the seat vacated when Joy Reid moved to her own weekday primetime show, was momentarily stunned into silence, but eventually managed to agree:

I have, I have no retort to that, congresswoman. That’s, that’s certainly accurate. 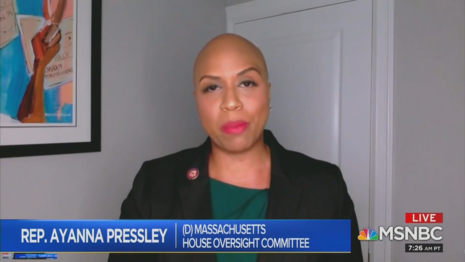 Cross told Pressley that she was looking forward to hearing from her “all week, as we kick off the Democratic National Convention.” Conservatives may forward to hearing from Pressley. For that matter, they may demand that Pressley be given a prominent speaking slot at the convention so that American voters can learn that Democrats are promoting “unrest in the streets!”

Note: in her tirade against President Trump, Pressley provided an unintentionally amusing moment, saying, “as Dan Rather reminded us, cheaters are gonna cheat.”

You’re so right! Like when Rather cheated by using forged documents in an attempt to destroy the candidacy of George W. Bush!

Ayanna Pressley’s call for “unrest in the streets” was sponsored by Liberty Mutual, Choice Hotels, and Infiniti.

AYANNA PRESSLEY: When it comes to their policies, the cruelty is the point. And when it comes to their culture, corruption is the point. And so, again, nothing with them is surprising. Donald Trump knows that his failings are on the ballot, that we have lost hundreds of thousands of American lives that were preventable and that’s just the most egregious of his criminal negligence and sluggish response and science denials and his failures of leadership.

He knows those that failures are on the ballot, that the occupant of the White House is on the way to being a temporary one, and, as Dan Rather reminds us, cheaters are gonna cheat.

And so. the only way that he thinks that he can be even remotely successful is to suppress and to undermine our democracy, beginning with the United States Postal service, which is a war on them and the livelihood of those essential workers and their families and those who rely upon the critical services that the postal service provides . . .

PRESSLEY: They need to be. And we need to continue to — listen, I’m looking to the public. You know, this is as much about public outcry, and organizing, and mobilizing, and applying pressure so that this GOP-led Senate and these governors that continue to carry water for this administration, putting the American people in harm’s way, turning a deaf ear to the needs of our families and our communities, hold them accountable. Make the phone calls, send the emails, show up.

There needs to be unrest in the streets for as long as there’s unrest in our lives and unfortunately there’s plenty to go around.

CROSS: [stumbles] I have, I have no retort to that, congresswoman. That’s, that’s certainly accurate. And thank you so much for coming on with me today. I’m looking forward to hearing from you all week as we kick off the Democratic national convention.