Toyota India will soon launch its second badge-engineered product in the Indian market after the Glanza based on the Baleno. The manufacturer has already released an official teaser image of the car and here is the first image of the vehicle as shared by ACI. Based on the Vitara Brezza, Toyota’s newest launch will be called the Urban Cruiser. 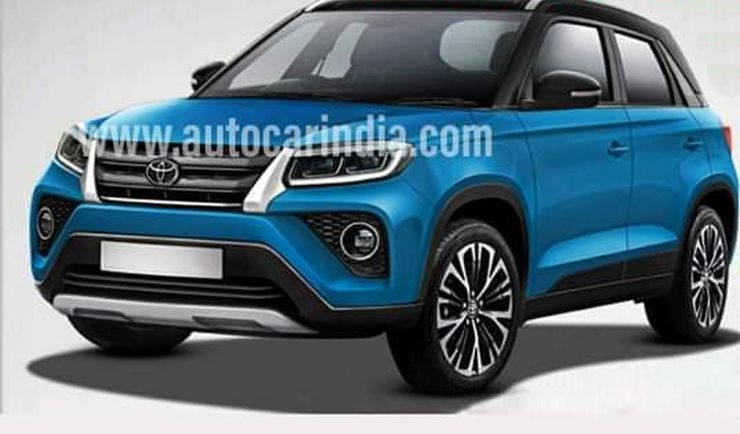 The picture reveals that the all-new Toyota Urban Cruiser will look like the brand’s highly successful product – the Fortuner. It gets a new grille that looks very similar to the Fortuner and the bumper has been redesigned too. Toyota has also redesigned the fog lamp housings. Also, the alloy wheels may look different from the Vitara Brezza too. The rear of the car has not been revealed. However, we may get to see a different bumper in the rear.

Also read: Toyota Innova 2.8 vs Hyundai Verna 1.6 in a drag race on video

The car will come with the same 1.5-litre petrol engine that powers the Vitara Brezza. The new petrol engine will produce a maximum power of 105 PS and peak torque of 138 Nm. There will no diesel option just like the Vitara Brezza. Toyota will also offer the SHVS Smart Hybrid system with both manual and automatic variants of the Urban Cruiser. Maruti Suzuki only offers the SHVS Smart Hybrid with the automatic variants at the moment. However, they might introduce the hybrid-manual variants of the car soon.

This will be Toyota’s first car in the sub-4m compact SUV. The segment saw rise in the number of vehicles in recent times. Last year, Hyundai launched the all-new Venue while Mahindra launched the all-new XUV300. This year, Kia and Nissan are planning to enter the segment with the Sonet and the Magnite respectively. The growing number of cars in the segment will certainly heat up the competition in the market.

The bookings for the all-new SUV will start on 21st August 2020 and the deliveries will begin shortly after that. The price announcement is also expected to happen by the end of this month to gain on the festival season, which starts in September. 2020 Volkswagen Tiguan Allspace to be launched in Malaysia on Aug 12 – seven-seater, R-Line & Highline