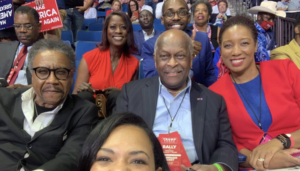 While it is unclear where Cain, who was 74, contracted the disease, he was among several thousand people who attended a Trump campaign rally in Tulsa on June 20, most of whom did not wear masks. Cain, who co-chaired Black Voices for Trump, was pictured maskless and not socially distancing at the event.

Cain is one of the most prominent Americans to have died of the virus, which has now claimed more than 150,000 lives in the United States. Word of his death comes amid a heightened focus on how seriously Republicans have taken advice from medical experts…

…Cain was hospitalized less than two weeks after attending Trump’s campaign rally in Tulsa. He was pictured not wearing a mask at the event, and before being hospitalized, he advertised in a tweet that masks would not be required at an Independence Day celebration that Trump staged at Mount Rushmore in South Dakota.

“PEOPLE ARE FED UP!” Cain wrote.

We may never know if Cain contracted COVID-19 from attending that infamous June rally for President Trump in Tulsa, Oklahoma, but the actual date of infection is a moot point. Cain was outspoken about his distrust of medical advice surrounding the pandemic and applauded Trump’s distaste for masks and social distancing:

They deleted the tweet this morning, but it’s still appearing if you click through from a link. Less than a month ago Herman Cain tweeted this. He died from COVID-19 this morning. pic.twitter.com/dDAHqA1ov8

This isn’t a coincidence; if you have followed Trump’s months-long defiance and ignored masks and basic social distancing measures, you are considerably more likely to contract the virus and suffer from its wrath. You can Tweet about COVID conspiracy theories and your strident opposition to basic science as much as you’d like, but it won’t change the fact that scoffing at medical advice makes you more susceptible to COVID-19. People are literally dying because they followed the rhetoric of President Trump.

Cain’s recent political fortunes were not positive, but he was briefly a big name in Republican political circles when he ran for the GOP Presidential nomination in 2011 — and Colorado played a role in that rise. Cain actually won the Presidential candidate straw poll at the 2011 Western Conservative Summit in Denver, which probably says as much about WCS attendees as it does Cain; the former Godfather’s boss flamed out of the race a few months later amid multiple allegations of sexual harassment and adultery.

We can only hope that Cain’s ultimate legacy is to prevent others from contracting COVID-19 by heeding the warning of his death. It might be crass to say that Trumpism is killing its adherents, but it wouldn’t be inaccurate. How Trump Is Once Again Colluding With Russia